Tears of Heaven by Ciarán Searle

You are part of an adventuring party, making their way to the Tears of Heaven, a waterfall that is said to fall all the way from the celestial plane. Your party recently fought and defeated a powerful lich, whose phylactery is now in the possession of the fighter. It is said that the Tears of Heaven are the only way to destroy the phylactery, the waters being pure enough to dissolve the foul magics surrounding it.

Your battle against the lich was fierce and Edren the paladin, leader of your party, was slain.

Though your greatest foe is defeated, for now, their undead horde has been amassing around the Tears of Heaven. Even if you reach your destination, victory is not assured.

Note: This is a game that is intended to have a significant amount of walking. This is the part of the fantasy story that isn’t usually told: the large amounts of relatively uneventful travel by foot. As such, this game is more focused on your relationship with your companions than on action and heroics.

@Ciaran’s larp is an example of a relatively new larp genre: the walking larp - games in which the primary “action” is walking from A to B (as opposed to the walking just being a short break between fighting monsters). The earliest example I can find of this is The White Road (which you can read about it Playground Worlds ), in which a small group of Danish homeless people walk to the sea to buy a dead friend. And then there’s the Czech Legion: Siberian Story, about a Czech military unit walking across Siberia during the Russian civil war. In that one, the players are expected to walk ~20 miles in subzero temperatures in the depths of winter, with occasional interludes of being shot at and killed. There’s an interesting article about its design here, and some notes from a Knutepunkt talk about lessons for spatial design in multi-location larps.

Both of those seem pretty gruelling - basicly a weekend-long tramp with attached larp elements. “Tears of Heaven” has a much shorter format, so will be far easier physically. Its also potentially easy to re-stage in other locations - there are plenty of 2 hour “waterfall tracks” around New Zealand. I’m looking forward to playing it at Phoenix.

in which a small group of Danish homeless people walk to the sea to buy a dead friend.

I’m going to assume you mean “bury” here, but it’s funnier that way

Also, I heard about that Siberian one, and (in my opinion of course) it exemplifies everything that’s wrong with “Nordic-style” larps :ewwww:

Oops. Yes, bury, though now I’m thinking of a sale at the zombie mart. “We’ve got to get him back! We can’t just let him end up in some dungeon eating adventurer’s brains forever!”

Legion definitely sounds like “type II fun” - fun in retrospect, but maybe not at the time. But its not just a “misery larp” - they’re trying to tell a story, it has characters, and an actual game rather than dumping it in the players’ laps with a workshop.

I think the short format of Ciaran’s game reduces the misery, and thus the chances of people dropping out of character.

now I’m thinking of a sale at the zombie mart

Thank you for making my day.

Ah, topic? Yes. Walking LARPs. Not my kind of game, I think. I hate running into tourists in full costume.

Yes, it’s certainly not intended to be a miserable time. In addition to me going along as GM, the bard and cleric each have in/out of character roles ensuring that everyone is safe and comfortable. It’s not necessarily a happy game, as grief is a core idea, but it’s certainly not about driving people to the brink of exhaustion.

Not my kind of game, I think. I hate running into tourists in full costume.

That’s a definite risk of the format. Though there’s plenty of quiet secluded spots where it can be minimised or avoided.

I’ve been wondering for a while about the tracks around Brookfields, where they go and how they could be used in the events that are currently run there. I don’t think they have a waterfall though. The Auckland camp that was used for Saga does, but the track is under a rahui and people shouldn’t go there.

in which a small group of Danish homeless people walk to the sea to buy a dead friend.

I’m going to assume you mean “bury” here, but it’s funnier that way

Also, I heard about that Siberian one, and (in my opinion of course) it exemplifies everything that’s wrong with “Nordic-style” larps :ewwww:

I think they threw his ashes into the sea. Taking a body to a burial would have been a bit conspicuous, as they pushed everything they took in shopping carts along country roads.

I’ve been wondering for a while about the tracks around Brookfields, where they go and how they could be used in the events that are currently run there. I don’t think they have a waterfall though.

Me and Eva went for a wander one weekend last summer, up the track from the “not-quite-finished-new-cabin-in-the-woods” (up into the bush from the Cultist Circle/North Wind Camp). We made it all the way up to the ridge at the back of the valley on a quite clear but steep track. It wasn’t terribly well formed either - rough dirt-hewn steps, needing to hold on to the trees in some places. Not at all unpleasant (at least until my knee gave up the ghost on the way back down again). No waterfall, regrettably, but an excellent view of a few valleys. There were signs indicating a campsite further up there but we were struggling to figure out how much further it might be and weren’t equipped for going out of sight of safety.

Here’s another one: Experimental Findings, by Mo Holkar:

Scattered across the desolate marshes are five experimental measuring stations, which were put in place ten years ago, around a former military test site. They were set up to measure changes in wildlife, etc, resulting from this activity. Now is the time to check them, and gather their results. A team of scientists progress around them, taking measurements; and a story unfolds.

Again its short form - 5 setpieces separated by 10 - 15 minutes of walking each. Which is more walking that you usually get in a combat larp, but not so much as to be onerous.

Well, Phoenix has been and gone and Tears of Heaven was (in my opinion) rather successful. We didn’t have a real waterfall, but even with a non-ideal environment I had a great time.
Now I know that works, I’m thinking about reusing the format for another game. So far, I am thinking about a post-apocalyptic version.
I might add a small amount more bleakness, and rather than an established adventuring part rediscovering themselves after the death of their leader, I think this one will have the characters not knowing each other very well at all at the start.

I’ve been thinking about other things you could do in that format. Post-apocalyptic was one, or there’s a pilgrimage of some sort, or a survey team exploring an alien world.

I’m currently listening to Algernon Blackwood’s The Wendigo, and thinking that it might make an OK walking larp. Use a forest for the setting (the lonelier, the better, consistent with safety, of course), give the characters dreams when they “make camp” to heighten the weirdness and sense of fear and suggest topics of conversation and actions which might help them. It being difficult to remove characters from the game in this format, I don’t think you could have someone taken each night - but you could culminate with that, and have a test to see if the group survives or if they all perish in the boreal vastness.

Auckland area - if anyone is interested in a walking larp I know a venue that might be perfect for it. It’s bookable ($10/person/day, or it was 4 years ago), varied terrain, and you could plot paths through it to stage the game easily enough, with plenty of space for camping, and with shower and toilet facilities. 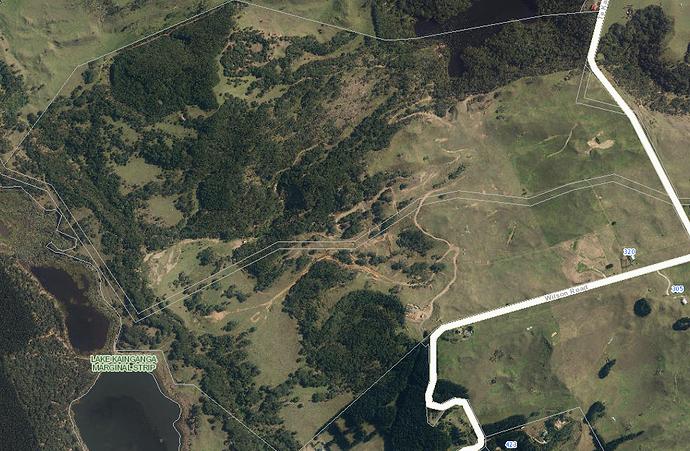 That also looks potentially like a great location for a big camp-out larp, European style, with those big clearings surrounded by woods and far from roads.

Only 1 hr drive north from Auckland Airport too.

It’s really good - there have been (and are I believe) National scale airsoft events there - and they only really use the western half of the area- which is about 1 square kilometre. Plenty of room for parking too.
If anyone wants to go out and have a look I’m happy to come and be a guide.

Seen on itch.io: The Hallowed Walk, a folklore-inspired walking rpg:

The Hallowed Walk by bridlewise

A storytelling game for two to five players going for a walk in the outdoors.

The Hallowed Walk is a game for a group of friends, which encourages you to use your imagination and draw inspiration from the landscape to tell a story about a mythic journey. It is inspired by the atmosphere of stories like The Dark Is Rising, Mythago Wood, The Weirdstone of Brisingamen and the Green Man’s Heir, as well as the British walking tradition of ‘Beating the Bounds.’

The structure of the Hallowed Walk encourages interaction with the world around as you pass through it, tying your characters’ stories into the sights, objects and places you encounter, and revealing them through an inventive new lens.

Each player takes on a character who has been chosen to take part in a traditional walk. Their goal is to perform a rite or ceremony of importance to your home. As you progress on your journey, you will ask each other questions from the game cards which serve as storytelling prompts, and together you will shape the story until the crisis point of the Rite is reached. Will your characters’ efforts end in success, or will new dangers arise to threaten your home?

Its on itch, so it is workshop-based, with thin characters and a tone rather than a setting. The central mechanic is asking another player a question from a card (in the style of a Descended from the Queen game), and neither the questions or answers are necessarily in-character: like For the Queen, you may be world-building rather than answering in-character. It doesn’t seem immersive, and its not so much a walking larp as an rpg (broadly defined) that you play while walking, using what you see as inspiration. Still, it might be interesting to see how it could be adapted to be larpier.

Didn’t you post this in a different thread some time ago? It sounds very familiar.

If I did, I can’t find it. But one of the problems with workshoppy games is that they’re all the same :-/