Over the weekend I went to Phoenix, SAGA’s annual larp con. It was my second year of attending, and I’ve got used to the quirks of their format. Phoenix is a non-residential, non-catered con, so you have to fend for yourself. Fortunately their venue was in easy walking distance of the motel I’d chosen, and there were plenty of people willing to give people a lift to get them somewhere they can buy lunch in the rain, so its not that much hassle. The con format and seminar room venue means that it is pretty much restricted to indoor theatre-style games, for the moment at least. The game list is here.

Friday night: Like There’s No Tomorrow (Chloe Sutherland and Robert Vincent): What would you do if there was only three hours until the total destruction of humanity? Turns out that what people actually do is play Twister, to backing music by Europe. That, and try desperately to settle their personal business while they have time. It was a touching game, and quite morbid - some characters killed themselves before the end (three of them right in front of me). People reunited with loved ones, considered their faith, hooked up, desperately tried to use the jammed phone lines to say goodbye to absent loved ones, wrote on a wall in case we all survived, and said stupid things to the camera. And then we all died - dangit 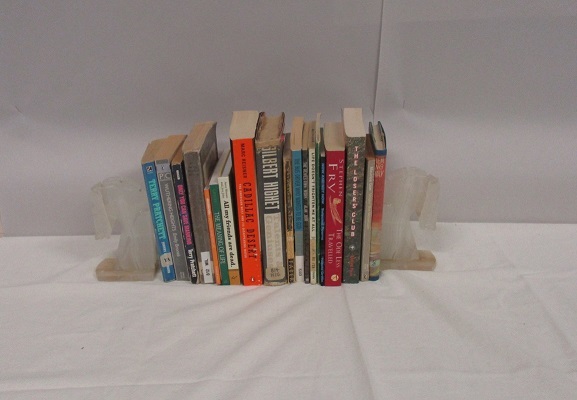 The world’s most depressing book collection.

If you get a chance to play this one, I really recommend it.

Saturday morning: The Koenig Dead: The second episode of Tony Mitton’s gradually expanding Kestrel Saga, facilitated by @Catnip. I can’t say too much, because its running in Wellington next month, but I had a good time as Sax, and I’m really looking forward to The Omega Delivery next year.

Saturday afternoon: The Hunt for Excalibur (Samantha Nicholls): A sequel to Call of the Wild Hunt, which I’d previously played at Hydra. TBH I had little idea of what was going on and what I was meant to be doing, but it didn’t matter - I was cast as the Archangel Michael, and got to spend the game needling my brother Lucifer and chewing the scenery before biting off more than I could chew (turns out Father wasn’t as big as he claimed to be). A great time, but a bit confusing in its mythology.

Saturday evening: A Pomposity of Professors (Stuart Stoddart and Jo East): Comedy university politics, the larp! A collection of academic stereotypes battle it out for prestige, promotion and free drinks! Also, a seditious conspiracy of TAs, a tiger, and a restructuring. While I tried hard to be the world’s worst professor (one of the ones whose sole skill is mercilessly exploiting their postgrads and who hates students and teaching), apparently I still wasn’t as bad as some real life ones. Which, given that I was advocating using undergrads for pharmacology experiments (just give them a McDonald’s voucher and its all fine) and considering adopting the culinary arts’ Gordon Ramsey-style motivational methods, is a bit frightening. A very silly game, but a lot of fun.

Sunday morning: Inheritance: Sunday was GMing day for me, and first up I ran Warren Tusk’s transhuman game (available here). I think it went well, with the death and the resulting wheeling and dealing serving as a bit of a stalking horse for discussion about personal identity and what to do when you can do anything.

Sunday afternoon: Boffo’s Birthday Bash: The rain had stopped, so I ran @Catnip’s Wodehousian comedy outdoors in the courtyard as a garden-party. It worked well, with a lot of eavesdropping on people through hedges. The players also went wild with the drink-spiking mechanic (slipping someone a stiff drink so they’ll have the courage to propose being an old Wodehousian trope, though people did seem to enjoy brining the Aunts unexpectedly alcoholic drinks). There were several dognappings, a bit of biffo between friends, and some bribery of the footman, before it all ended happily with a series of proposals and an aunt being dragged off to the loony bin (and all it cost was a fiver). All in all an excellent time, but I shudder to think what will happen at the engagement party.

Again, I had a great time, and I recommend this con. And for those nervous about non-residential cons, apparently they’re looking at a scout camp for next year to avoid being screwed by UCSA again, though that will significantly increase the price.

@IdiotSavant has already described the basic structure of Phoenix, so here’s my thoughts on the games I played

Friday Evening: Gaslight
Gaslight is the first game I’ve actually played with all female characters. The setting is that the characters are all inmates in an insane asylum sometime in the 19th Century. At the start of the game the characters knew very little (only their name and a one sentence reason for why they were in the asylum). Over the course of the game there were additional memories that are scattered around the play area that could be picked up. However, the game deals with some serious (and quite dark) issues and the random nature of the recovered memories means there is no way as a player to ensure that you avoid particular themes.

Environmental control played a major part in Gaslight. At the start of the game the players had their hands (loosely) bound behind their back and were lead into the play area (2 gazebos with all sides covered and with a number of tealights as the only light source). I can’t say too much more without dropping spoilers.

Saturday morning: Koenig Dead (GMing)
The Koenig Dead is part 2 in a series of SF LARPs following the adventures of the crew of the Kestrel. I’ll be rerunning this (with IdiotSavant) in Wellington in about a month, so I won’t say too much. Suffice to say that our poor captain (as well as the GM) had a hard job keeping tabs on the crew with all the shenanigans going on. I’ve also thought up a few new staging tricks for the Wellington run.

The authors (Tony Mitton and AJ Smith) have just sent me the files for Part 3 (The Omega Delivery), so I guess I know what I’ll be doing next year.

Saturday afternoon: TRYST
The premise of TRYST is that in 2016, not only is time travel invented, but it is also used in marriage counseling by summoning past versions of the couple to give their perspective on the relationship. Thus we ended up with 5 versions of Charlotte and Oliver going back to when they first met to the present day. Needless to say this led to some pretty socially awkward moments.

Overall the tone of the game was bittersweet. There were some characters who really benefited from the therapy, but they were all past versions of Charlotte and Oliver who were doomed to have their memories reset at the end of the session and then go on to make all the same mistakes.

The other thing that TRYST demonstrated was that a significant number of people will try to cheat any system designed to maintain the timeline and prevent paradoxes. So if tie travel is invented this year, use it with caution.

Saturday evening: A Pomposity of Professors
The flagship LARP was a comedy set in the Harbridge Ivy League University. My character was a professor who was a bit bored of teaching and was desperately looking for ways to get attention and spice up her life. (Fortunately she hadn’t decided to write the Great American Novel … yet). Unfortunately she failed to achieve the notoriety she desired, but she still managed to keep her job despite not having nearly so many qualifications as she claimed. On the other hand, there was so much dubious stuff going on that it’s no wonder the Board hadn’t noticed.

Sunday morning: Inheritance
Inheritance is a game by Paracelsus Games set in a post-human future with culture-level technology. From my character sheet I thought it might be a challenge to keep myself entertained for two hours. However, when all the characters gathered there was enough collective kookiness to generate enough strange philosophical discussions to fill the time.

Sunday afternoon: Sarabande
Sarabande is a nordic LARP concerining a group of artists in a Montematre cafe around the end of the 19th Century. I signed up for this knowing that it would be a little different from the usual style of LARP I play. The game start with a workshop phase to design the characters (although they were only really established to the point of name, archetype, and a couple of relationships). The game itself was quite structured. One rule I found problematic, was the restriction that all conversations had to be on the themes of freedom, love, truth and beauty. While I love the idea of emphasising these themes, this restriction shut down a lot of roleplaying opportunities and made it difficult to develop any sort of shared context. I think this game might work better for people who prefer largely internal roleplaying. Overall, I don’t think this is really my thing, but I’m happy to have tried something new.